We are very pleased that an Angus steer bred and prepared by Gundagai High School’s Agricultural program has been awarded GRAND CHAMPION CARCASE  at the 2011 Royal Melbourne Show scoring 91.817 points out of  a possible 100.  This steer won four of the seven major carcase awards on offer, also picking up Champion Export Carcase, the Highest Scoring School Bred and Prepared Carcase and the Champion School’s Carcase.  “Shrek” as the students named him was sired by Bongongo  D35   a full brother to Bongongo Bulletproof Z3.  Shrek was able to outclass the other 171 entries despite not being placed on the hoof! Bongongo D35 was lent  to Gundagai High School’s Agricultural Department  by Bongongo Angus principals Bill and Shauna Graham. 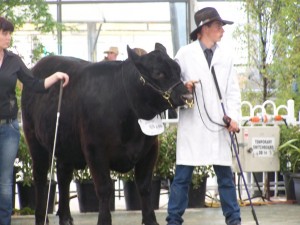 Spring On-Property Bull Sale is on
Monday 16th May 2022